Brigid’s Flame on a Dark Day 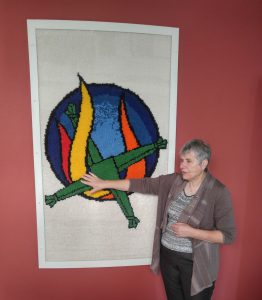 Sr. Phil O’Shea at Solas Bhride Centre, Kildare, Ireland, 2016
“Solas Bhride is a Christian Spirituality Centre which welcomes people of all faiths and of no faith. The Vision of the Centre is to unfold the legacy of St. Brigid and its relevance for our time.”

Yesterday, on Jan. 31, the eve of Imbolc, two of the oldest Western democracies publicly showed that they have been hijacked by interests that benefit conservative, white supremacist, patriarchal elites instead of the good of all. It was a dark and difficult day.

A thin majority of the United States Senate voted against hearing any witnesses or considering any additional evidence in President Trump’s impeachment trial. Senate Republicans promise to acquit him despite clear and convincing evidence of his guilt. During the trial, Trump’s lawyers have provided pseudo-legal scaffolding for his false assertion that Article II of the Constitution gives him the right “to do whatever I want as President.” Our would-be dictator continues to neutralize any person or institution that could rein in his ever-expanding power.

In Brussels, the Union Jack, the flag of the United Kingdom, was quietly removed from European Union buildings in Brussels. In a video projected on the Cliffs of Dover in England, two British World War II veterans expressed deep sadness about Brexit and strong feelings of unity with Europe. As the daughter of a doctor who served behind the front lines in Europe during World War II, tending the shattered bodies of soldiers, I was moved to tears.

The United States has never lived up to its promise of “freedom and justice for all.” Our government has most often worked for the interests of wealthy white people over everyone else. When Barack Obama was elected with widespread grassroots support, it seemed that the tide was turning toward a more inclusive, equitable democracy. Those whose power was threatened moved quickly, through Congressional obstruction, voter suppression, court cases like Citizens United, and an influx of huge amounts of money, to consolidate that power. Trump’s presidency, far from being an aberration, is the culmination of their efforts.

All of us and our ancestors have lived through dark and difficult times before. The path ahead of us is steep and dangerous. We have the strength of our overwhelming numbers, our integrity and moral clarity, our creativity and persistence, and our connection with the Earth and all beings. We need to confront the ways we have, knowingly or not, collaborated with the white supremacist patriarchy in the past and present. We must learn how to have each other’s backs in meaningful and trustworthy ways that go beyond saying the right words. And we need to fight for what we believe in with all our might, in whatever way we can.

Imbolc is Brigid’s holy day. This Celtic goddess, who became St. Brigid under Catholicism, can provide inspiration for us now. Brigid fiercely defends women’s rights and sovereignty and is the protector of mothers. St. Brigid is a champion of the poor and oppressed. Brigid, triple goddess of fire, holds the power of healing, poetry, and alchemy.

Lit by the flame of our passion for justice, may we heal, inspire, and transform ourselves, our country, and the world.

2 Responses to “Brigid’s Flame on a Dark Day”