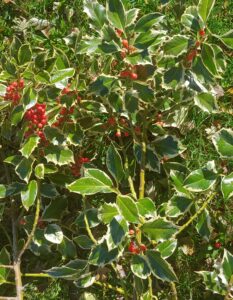 In pagan traditions, Samhain is the New Year, the time when the old year dies away. We move into a period of darkness and rest before spring’s rebirth. Death is all around us. Leaves, first brilliant red, orange, and yellow, lie brown and rotting on the ground. Stalks of summer’s yellow sunchokes turn black, signaling that it’s time to prune them back. Hawthorn berries ripen and fall, blanketing the sidewalk. We pick the last swollen, tough beans, and the wind blows the beanpoles over.

For the past thirty years, two full-grown holly trees have stood at the north edge of our front yard. One had the familiar deep green, shiny, spiky leaves. Its berries propagated tiny, stubborn treelets all over our yard and the neighborhood. The other tree had variegated leaves: deep green in the center, lighter green shading to white at the edges. It too produced bushels of berries, but it must have been sterile; no little offspring took root. Every December, neighbors came over and offered hot home-baked pastries in exchange for freshly cut boughs.

Holly trees were sacred in ancient Ireland. People believed they give protection from poison, witchcraft, and lightning. Turns out there is scientific evidence of this; the spines on holly leaves can act as miniature lightning conductors. When the cedar tree in front of our next-door neighbor’s home was struck by lightning almost twenty years ago, the hollies stood between that giant bolt and our house. Maybe that saved us.

English holly is not native to the Salish Sea region. Early white settlers brought their Christmas customs with them. As the holiday season approached, they stripped native salal, huckleberry, and Oregon grape branches from the woods to approximate traditional holly boughs. This ecosystem threat provided part of the motivation for Lillian McEwan, founder of the Washington State Society for the Conservation of Wild Flowers and Tree Planting, to champion mass plantings of holly all over Seattle and throughout Washington and Oregon. (Desire for profit pushed the plantings as well; holly wood and branches supplied a lucrative market.) Though well-intentioned, the human colonizers introduced a plant colonizer that began to spread and crowd out native species.

I loved our holly trees and also felt conflicted about the harm they were doing, especially in the old-growth forest of nearby Seward Park, where dedicated volunteers have spent thousands of hours removing holly. One of the trees started to show signs of ill health, causing our next-door neighbors to worry that it would fall. Last spring, we decided it was time to take the trees down. We knew birds nested in their branches, so we waited until fall.

Before the tree company came, we sat under the trees and thanked them for their beauty and shade, for allowing our children to climb and play in them years ago, for providing shelter and abundant food for birds and squirrels, for protecting our home. We explained why we wanted to cut them down and asked their permission. We felt their assent in our bodies and souls.

Now their bodies lie in pieces in our yard. Neighbors come by to load up wheelbarrows with firewood. Holly’s dense wood burns slowly and hot. Our younger son’s high school woodworking teacher takes some of the spalted wood from the rotten trunk to craft beautiful bowls. “The wood looks like ivory when you polish it,” he tells us. The sawdust from grinding the stumps will mulch our gardens. Nothing will be wasted.

Seattle’s Trees for Neighborhoods program delivered three free saplings that we will plant next week with help from volunteers. Two native shore pines will go where the hollies stood, intertwining their dark, long-needled branches and producing nutritious, oily seeds for birds and animals. In our sunny parking strip, where a forest pansy redbud tree fell down in a big storm last winter, we’ll plant a drought- and heat-tolerant river birch tree with brown, peeling bark and leaves that turn bright yellow in fall. We are looking to the future; all of these trees do well in dense, clay soil and hotter, drier weather.

Death makes room for new growth. It nourishes the earth to feed the future.

One Response to “Death and New Life”