Embracing the Crone, Reclaiming Our Sovereignty 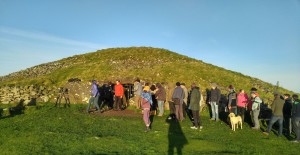 We are approaching Samhain (SOW-en), the start of the Celtic New Year, celebrated here in the United States as Halloween (All Hallow Even). “Samhain marks the beginning of the giamos season, the time of darkness, the realm of the goddess, where the feminine energy principle is experienced and the season of non-doing is initiated.”[1]

This is the time to call on the Crone, the Hag, the fearsome old one who, in the ancient tale, blocks the way to the life-giving spring and demands a kiss from those who, in desperate thirst, seek access. Who rewards those brave enough to embrace her fully, lustily, with beauty, power, sovereignty. Wild, powerful, generous, nurturing, wise, this oldest Earth Goddess belongs to the stone mountains in the west of Ireland. Sliebh na Cailli (Hill of the Hag), a high hill in the east of Ireland, is also dedicated to her. She is called An Cailleach.

I first met her in a trance state as I did a shamanic journey near the ancient stone cairn (mound) on top of that hill six years ago. She terrified me. Over time, in many encounters with her on journeys, her wise, kind grandmother aspect emerged. She embodies the strength and determination that I have sought for many years. I draw on her for backbone and connection with the Earth.

This autumn equinox, I again stood on Sliebh na Cailli at dawn, waiting my turn to enter the cairn. The rising sun’s light shot through the passageway and illuminated the beautiful Neolithic carvings in the stone at the back of the cairn. Those of us crouched in the darkness inside gasped in awe.

In the Celtic tradition, An Cailleach is strongly connected to the North, direction of fighting battles, overcoming challenges and addictions, confronting one’s shadow, undergoing transformation. She whips up gale-force winds, torrential rains, deep snow, bone-chilling cold. Her love is fierce, and she asks us to call forth our own fierceness to meet her in the North, so that we can receive her gift, the gift of sovereignty. In a political sense, sovereignty means the ability of a state or people to self-govern. It also refers to the ability to stand in our power and use the full range of our gifts in our own lives. It is inextricably linked with the responsibility to recognize and honor the sovereignty of others and to serve the common good.

The United States is a country facing the extreme consequences that follow centuries of violating the sovereignty of its people, particularly women, people of color, and indigenous people. In the old days in Ireland, to become king a man had to marry the goddess of the land in sacred ceremony and vow to protect and honor her sovereignty. He was required to rule in a way that allowed all to experience and share in the land’s abundance. If he failed to do so, he was ousted as king. How far we have come from those days!

In this season of gathering darkness, I call on An Cailleach to help us through the challenges we face at this time. Our leaders for the most part have not served the land and her people well. We suffer from rampant racism, ongoing war against the indigenous peoples from whom the land was literally stolen, oppression of and violence against women, economic inequality, environmental destruction, and on and on. To access the life-giving spring and regain our sovereignty, to fully embody our wild, lusty, powerful selves, to honor the stones, the Earth’s backbone, we need to embrace the old one, the Crone, An Cailleach. Whatever name you have for her in your culture or tradition, it’s her time.