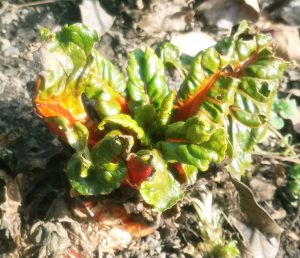 Now that the temperature outside is rising, it’s no longer snowing, and I can spend a few hours out in the garden, I take stock of how the plants are doing. Which ones died, which ones barely survived weeks of below-freezing temperatures in February and a sudden March snowstorm, which ones thrived. Two chard plants, left over from last summer, are blackened cylinders; several others show brilliant flashes of red, yellow, orange, pink stems beneath tiny, emerging green leaves. The hypericum, a colorful shrub that a bird planted in our vegetable garden a few years back and I transplanted to the parking strip, was just sprouting new leaves when the freeze came and turned many of them brown. New green-and-red shoots poke from the branches that still live. I prune back the dead growth and look forward to waxy yellow blooms and red berries.

It’s been a difficult winter. In late November, my sister-in-law Mary, my wife Martha’s sister, let us know that their 95-year-old mother Elizabeth had suffered a precipitous cognitive and physical decline, probably from a small stroke. She could no longer stay in the facility where she lived in San Pedro, California; they couldn’t provide the level of care she required. We all decided that the best option was to move her up here to Seattle to an excellent assisted living facility. We managed to get Elizabeth packed up and to the airport, and Martha and I flew up here with her wedged between us in seats near the airplane bathroom.

Less than three weeks after getting Elizabeth settled in her new home, Martha and I flew back to California. Martha’s older brother Stephen was dying of cancer. We went to Oakland with our son, daughter-in-law, and baby granddaughter Alma to say goodbye. As Stephen lay on his back in bed, his whole being lit up when he saw little Alma. Weak as he was, he insisted on holding her, touching his nose to her nose, making faces at her. Their encounter, the only one they will ever have, was delightful and poignant. Stephen died a week later, the day after he turned 71.

A death disrupts the rhythm of our lives, tears a hole in the fabric. We look at Stephen’s face, smiling in photos from his 70th birthday party, when the chemotherapy was still working, and can’t believe he’s gone. In his speech that night, he alluded to the fact that he might not see another birthday. I didn’t believe him. We were both right; he was mostly unconscious that day, his breathing ragged and irregular. His wife, sons, daughters-in-law, and granddaughters tiptoed into his room just after midnight and sang “Happy Birthday” to him quietly so as not to wake him.

As I cut away dead hypericum leaves and study the chard stumps, I cheer every tiny sign of life, every luminous, bursting bundle of cells that fight past frosted wreckage, meet the sun and spread out to catch it. The sun warms my skin. I peel off one more layer of clothing and grief, gather up the stiff sticks I’ve cut from the shrub, and throw them in the yard waste bin. The garden looks cleaner, trimmer now. The intoxicating scent of daphne, its blooming delayed but not deterred by piles of snow, wafts across the lawn under the hawthorn tree.

Spring comes, always, after winter. New growth after death. Sometimes we have to look hard to see it: beneath dry, brittle leaves; at the pulsing core of a plant before it sprouts; below the surface, waiting to break through.