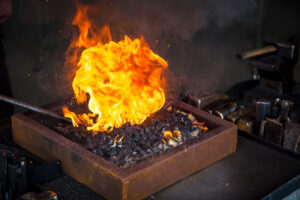 Image by Jens Rasch from Pixabay

Brigid, or Brid in modern Irish, is the triple goddess of healing, poetry, and alchemy. As the goddess of fire, she rules the forge and is the patron of blacksmiths, who through their art transform molten metal into useful, beautiful, and even magical objects. I am the great-granddaughter of a blacksmith. On this Imbolc, Brigid’s holy day, celebrated on February 1, I call upon Brigid in her transformative aspect.

The need for transformation has never been clearer. In the US, we need to reimagine and rebuild our power structures, economy, ways of governing, judicial and peacekeeping systems, relationships to the natural world of which we are a part, and relationships and communications with each other. Here, all of these systems rest on a crumbling foundation built by chattel slavery and genocide of Indigenous peoples, reprehensible policies carried out by European immigrant settlers with our own legacy of unhealed trauma. The structures have to be rebuilt from the foundation up.

This sounds impossible. But a few years ago, it would have seemed impossible that two Democratic senators from Georgia would be elected at once and that control of the US Senate would be flipped as a result. The election process and results in Georgia in 2020-2021 give me great hope. Black organizers in Georgia, led by Stacey Abrams of Fair Fight, Nsé Ufot of New Georgia Project, and LaTosha Brown of Black Voters Matter, among others, have worked and fought tirelessly for years to register new voters and make sure Black people and other underrepresented populations in Georgia are able to cast ballots. Despite determined efforts by Republicans to suppress BIPOC votes, voter turnout in the 2020 Presidential election in Georgia was almost 68%, higher than the country as a whole, and the state voted Democratic for the first time since 1992. The January runoff that sealed victories for Rev. Raphael Warnock and Jon Ossoff and tipped control of the US Senate to Democrats had much higher turnout than most runoffs, particularly among Black voters.

The groundwork for these stunning victories was carried out, town by town, voter by voter, over a long period of time. What might have seemed like a sudden change was the result of patient, persistent, strategic actions by a number of people. I was lucky enough to talk with some of these people as I recruited volunteers by phone to do door-to-door canvassing to cure ballots – to surmount onerous voter suppression requirements like voter ID by making sure that voters whose ballots had been rejected had a chance to correct any errors or omissions they might have made while voting. I was inspired and energized by the dedication and positive attitudes of these volunteers, who worked many long hours to ensure that everyone in Georgia who wanted to vote could do so.

Every small action we take in the direction of transformation makes a difference. Those of us making calls were told that each volunteer we recruited would be able to cure at least 10 votes. Each day we recruited hundreds of volunteers. That’s thousands of votes that otherwise would not have counted. Call by call, volunteer by volunteer, voter by voter, all of the election workers and volunteers in Georgia pulled together to produce those stunning victories. The fate of our democracy literally hung in the balance. Now we have an administration and a Congress that can and will act in ways that serve the American people – not perfectly, but in much better and more equitable ways than before.

The promise and peril of this moment we are living in seem overwhelming at times. How can we meet them? The task is daunting. Each of us has skills, abilities, gifts to contribute. Each of us has our own personal network, our sphere of influence, in which we can act. The systems and ways of communicating and behaving that need to be transformed extend into our local governments, workspaces, organizations, neighborhoods, families, relationships. Every action we take to change them in a positive direction, no matter how small, has an effect.

We will at times feel afraid, discouraged, uncomfortable. We may believe that nothing is changing, until suddenly everything does. For hope and inspiration, we can imagine the intense heat of Brigid’s flame melting the old forms so that the blacksmith can reshape them into new ones. We can embody the blacksmith – and the flame itself.